Whether it’s Paul Bissonnette having ice water dropped on him from a helicopter as he stands atop a mountain or Jimmy Fallon and Late Night Show guests dousing themselves with ice water on national TV – the ALS Ice Bucket Challenge is nothing short of inspiring. Something as simple as pouring ice water on your head, recording and challenging your friends to do the same has turned into a viral, word-of-mouth sensation. The ALS ice bucket challenge encourages creativity, altruism, and awareness. Sure, there is comedic relief in watching friends, family and celebrities pour ice water on their heads, but the real success is in raising awareness for Lou Gehrig’s disease and encouraging participants to donate money. And yet, some critics still harbor resentment towards the challenge calling it “slacktivism.” Put simply, they’re wrong. The point is people are talking about ALS. Everywhere. Lighting a fire on social media and news outlets, bringing awareness and money to a debilitating disease.

But, outside of a viral, word-of-mouth sensation, what is the driving force behind the challenge? Crowdfunding. The ALS Ice Bucket Challenge is a crowdfunding/crowdsourcing initiative. These challengers and the donors are all funding ALS research by raising small amounts of money from a large number of people. Each person that accepts a challenge is in essence raising a small amount of money for the ALS Foundation. Like any crowdfunding effort, it is not so much what you do (pouring ice water on your head), but why you do it (raising money and awareness for ALS research). Focusing on the bigger purpose, the driving force behind the organization and the project helps create a unique community of likeminded people to achieve a common goal (funding ALS research).

The inputs from the crowd of ALS supporters continue to trigger the crowdfunding/sourcing effort and so the domino effect continues. Motivation for participation stems from the feeling of being responsible for the success of others’ and the foundation, striving to be a part of a viral social initiative. But, why is this chilling phenomena so successful, and how do companies create similar, successful crowdfunding(sourcing) initiatives?

Share Experiences. There is no clicking a button, donating $100 and never looking back. The Ice Bucket Challenge is a refreshing, chilling experience to share with friends and family. Post it on Twitter or Facebook and then your entire social network can share in on the experience as well. Sharing memories and experience is a powerful force, as human capital drives influence.

Consider this: according to Facebook, more than 15 million people have posted, commented, or liked a post about the challenge. Even more impressive, the ALS foundation reported that there has been $88 million in donations since July 29, compared to $1.7 million during the same period last year. Those are impressive stats for pouring ice water on ourselves. If you didn’t believe in the power of crowdfunding/sourcing before July 29, here is all the proof.

Pete Frates, the original Ice Bucket Challenger, who also suffers from ALS, describes ALS and the Ice Bucket Challenge perfectly: “The story right now goes: You’ve got ALS, have it for a little while, a long while, but either way, the end is always the same. ALS always wins. So in order to rewrite the end of it, we need to raise awareness, money.”

As the domino effect of the Ice Bucket Challenge continues, we need to take a stand and continue crowdfunding. 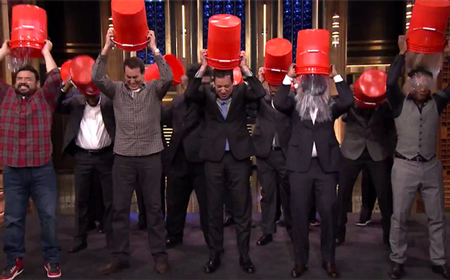