Lessons Learned From the Polar Vortex

This winter was brutal. With U.S. temperatures breaking records, dipping to the coldest they’ve been in 20 years, many businesses were affected. Not only did two thirds of the United States watch temperatures plunge into the negatives, but companies that were not ready for an unplanned weather event saw their operations affected by the polar vortex.

Now, as the freezing weather subsides, there are lessons that are being uncovered, from which many companies can learn.

Chegg, a Santa Clara, California based company, is focused on virtually helping college students with textbooks, resources and scholarships. Chegg recognized the need to deliver an outstanding customer experience during an unpleasant winter season. As the polar vortex moved across the United States, Chegg used Twitter to sponsor and geo-target their tweets, offering free shipping to students in those states. Tweets included creative and humorous text poking fun at the brutal winter. For example, one tweet, a picture of a man who looks to have frost bite reads, “You Shouldn’t Look Like This After Buying Your Textbooks.” The tweet then went on to offer free shipping on textbooks to, “warm ya up.” As the storm moved through different states, Chegg would update their geo-targeted tweets in real time to include those states, while also engaging with their customers in real time to resolve any challenges. As a result of Chegg’s “polar vortex” campaign, they received:

Many have been there, running around to find textbooks at a low cost, while trying to meet the professor’s unrealistic expectation of having the textbook the following week for class. But, during the recent polar vortex, buying textbooks not only seemed dreadful, but unimaginable. Although Chegg may have not been directly affected by the polar vortex, they recognized that their customers were. As such, they went above and beyond to satisfy their customers and deliver a humorous, yet pleasantly surprising customer experience, reflected in their sales.

2.       Customer Perception Is Everything

Your customer’s perception is their reality. Delivering a poor customer experience sets the tone for future interactions in the customer’s mind. An unplanned event will definitely put an organization’s customer support to the test.

Take JetBlue. After cancelling just north of 800 flights due to the winter storms, JetBlue’s customer support agents had to deal with the wrath of angry travelers. Aside from having their agents apologize to their customers, assuring them they would be on the next available flight, JetBlue developed an “elaborate compensation plan with various benefits doled out based on the number of cancellations a passenger suffered and whether he or she is a member of the airline’s loyalty program.” For example, passengers who had four canceled flights received a round trip ticket, even if they weren’t in the JetBlue loyalty program.

Trying to make customers feel more comfortable and secure with their decision to fly JetBlue, the company worked to make their customer’s perception exceptional considering the circumstances. As a result, JetBlue was able to:

·       Ensure their customers are always taken care of despite inclement weather.

Many organizations maintain the “invincible” mentality, never believing that unplanned events will take down or affect their operations. When news of the coming cold weather spread, one upstate New York Dairy company recognized the need to plan ahead.

Bryne Dairy President and CEO, Carl Bryne, approached the polar vortex with the idea to send an excess of inventory to its stores and its depot. As people stocked their refrigerators and pantries, preparing to hibernate for an unknown period of time, Bryne Dairy’s extra shipments of milk met customer demand. Not only did it meet customer demand, but it ensured that there would be enough milk available once the storm passed and customers needed to restock their kitchen.

·       Customer Acquisition: Meeting customer demand, while other companies couldn’t built brand awareness and turned their competitor’s customers into their own customers.

·       Brand Loyalty: Their customers became more loyal, as they saw that their brand of milk consistently had the shelves stocked. 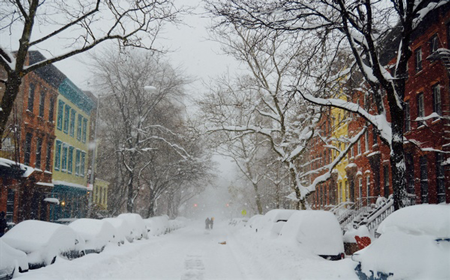